Walk About with Alister 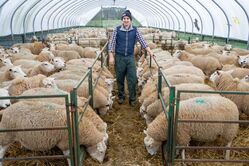 Alister Watson farms at Williamwood, Kirtlebridge, Lockerbie, where a Lleyn flock of breeding sheep is key to this progressive young farmer success. The farm is a low-lying unit with 250 Breeding ewes, 80 ewe lambs and 15 Tup lambs.

Alister said “after leaving college and moving from the east to the west our old stratification system of Blackies and Mules didn’t fit and replacements were having to be bought in annually.  I wanted to start up a self-replacing flock of sheep. I had considered many breeds but the Lleyn seemed to suit the farm perfectly by being both hardy, maternal and having the ability to be crossed with any terminal sire, the Lleyn also possesses longevity and a 7/8 crop ewe is not unheard of in the flock.

Recording plays a huge part of Alister’s sheep business, “between 2017 and 2020 I have been able to reduce average days to slaughter by 52 days by selecting for desirable traits, this means for every 100 lambs this equates to an astonishing 5200 days less on farm, this has reduced grazing pressure and a knock on effect we have more available grass for ewes to achieve full condition pre tupping.  Read more about Alister [HERE]