An exceptional trade was seen at Roscommon this year.  Demand in all sections outstripped supply.

The females started well with two year old ewes from Brian Mattews, Killeigh selling for €255/head to William Galvin, Geashill and another pen at €232/head to Justin Browne, Eniscorthy.

The first few pens of shearling ewes met a cautious crowd hence some did not find homes but once confidence built the trade soared with every pen sold with a strong demand.  Clive & Hazel Long, Lifford topped the section with their 1st prize pen selling for €340/head to Michael Murphy, The Rower.  Alan McDonald, Killeigh was next with the 3rd prize pen selling at €300/head to Mary Gordon, Enniscrone.  Jordan Long, Lifford sold a pen for €290/head to William Power, Enniscorthy.  Brendan Donnellan sold two pens at €270/head to Raymond Kelly, Templeboy and a pen of 11 to Ryan McElhinney, Letterkenny.  There were many commercial type pens picked up for €180 - €240.

The strong confidence continued into the ewe lambs were the section once again got dearer as the sale moved on.   There was 100% clearance.  Brendan Donnellan topped with his first prize pen selling for €280/head to S & B Morrow, Convoy.  Peter Shields, Dundalk sold a pen for €230/head to Alan McDonald, Killeigh.  Anthony Whooley sold a pen for €225/head to William Power, Enniscorthy.  Brendan Donnellan also sold at this price to Malachy Harney, Eadenstown.  Eleven pens sold for €200/head and over.  There were many commercial pens sold for €140 -€180.

The rams also saw a great clearance with only two not finding a home.  Clive & Hazel Long topped the section with Finnleigh Lleyn Dazzling Spirit.  Sired by Plasucha Bobby Dazzler, out of a Plasucha  ewe.  He sold for €1200 to Michael Murphy, The Rower.  Peter Shields, Dundalk came next with a Belmont ram sired by AW Hughes sire and out of a homebred ewe.  He sold for €980 to Brendan Donnellan, Ballinasloe.  Brian Matthews, Killeight sold Blm Bandy by a Peter Shields ram for €900 to Orla Barry, Duncormick.  All rams sold for €300 and over. 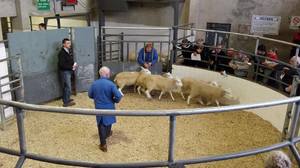 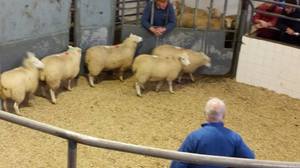 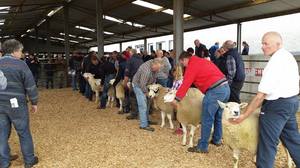 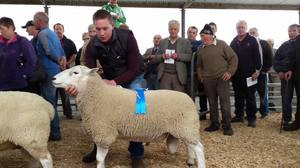 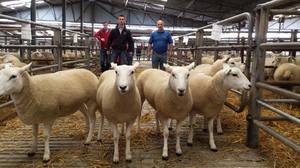 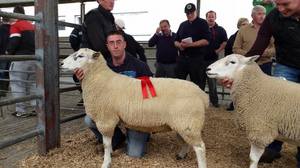 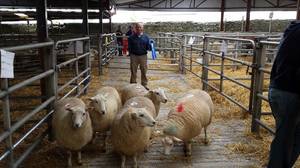