The show and sale - run by Aberdeen & Northern Marts (part of the ANM Group) in conjunction with the Lleyn Sheep Society Ltd – took place on Wednesday 9 September at Thainstone Centre, Inverurie.

Judge – Emma Cowie (Messrs Cowie, Carlingcraig, Fortrie, Turriff) – awarded the trophy to Lawrence for his champion ram, which sold for 600gns to G A Munro, Sandlea, Sandwick, Shetland.  Lawrence then went on to receive the trophy for champion pen of five females, which sold for £175 per head to the judge. 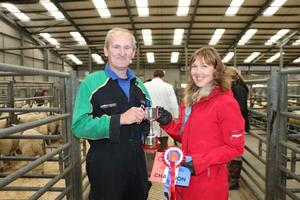