There was certainly a firm demand for quality sheep.  The shearling ewes set off with caution not helped by the fact the motorway was closed due to a motor accident with customers held up in the queue.  The shearling trade picked mid-way through when these purchasers were able to get to the ringside.  With plenty to pick from the buyers could be choosey with the ewe lambs but those pens which had been picked sold with a strong average of £102, £11 up on the year.  Rams saw a sound trade with a strong clearance of 75%.  There was a buoyant trade for breeder’s type rams with 33 realising the 1000gns mark and over.

The shearling ewe section topped at £400/head for a pen of six from JK Goldie, Ruthwell.  This pen included the five first prize pen of shearlings and champion females at the pre-sale show.  They were purchased over the phone by R Bowie, Crieff.  Next in the pens of shearlings section saw D Steen, Lockerbie sell 5 for £360/head to C Long, Co. Tyrone.  C & A Kennedy, County Down sold their pen of 3rd prize shearling ewes for £300/head to S Murnaghar, County Down.  H Goldie, Ruthwell sold the second prize pen for £200/head to SH & PM Shirley-Beavan, Hawick.

There was once again a class for individual shearling ewe giving purchasers the chance to buy a show animal.  The first prize from H Goldie, Ruthwell sold for £320/head to the purchasers of the champions H & PM Beavan.  The second prize ewe from D Alexander, Galston sold for £210 to D Nicholson, Ulverston.  J Kingan, Dunfries sold his third prize for £165 also to D Nicholson.

There were many breeders type pens of shearling ewes sold for £180 and over with many commercial sheep in the £120 -£160 price bracket with an improving trade in the second half.

The ewe lambs saw a high of £300/head for the 1st prize pen of five from J Morton, Penrith.  These were taken home by A McConville, County Down.  Farmstock Genetics, Selkirk sold the second prize pen for £200/head to MJ Fell Ltd, Whittington.  DN Bennett & Son, Meifod sold a pen of five for £155/head to A McConville.  L Organ, Llandysul sold five to C & A Kennedy, Ballyclare for £135/head.  The third prize pen from JA Barrow & Sons, Appleby sold for £130/head to H & P Hutchinson, Hartlepool.  The stronger stylish sheep were hitting the £100 plus with some tupping lambs been picked up from £85 plus.  Buyers were picking up running lambs again picking out those with style for £80 plus with only a handful of pens sold in the £70 bracket.

With a busy ring the atmosphere around the ram ring was evident and remained there till the last ram went through.  In was HM Dugdale & Son, Settle who topped when selling Borrins Fearless for 9000gns.  Sired by a homebred ram Borrins Euro, his grandsire is the 6000gns Peter Knowles ram purchased in Carlisle in 2014.  The ram had won the breed championship at Westmorland Show the week before.  He was purchased by GH Blakey, Morpeth.  Mr Blakey had had his only success earlier in the day when selling Netherton Fearless sired by Borrins Arrow for 7500gns to JA & R Geldard & Sons, Kendal.  This was quickly followed by Netherton Fabio sired by Fort Cracker, he was purchased by HM Dugdale & Son for 6700gns.  JK Goldie, Ruthwell sold Lochar Flanker the pre-show champion for 5500gns.  He was sired by Plasucha Chief and purchased in a two way split by HM Wells, Cardigan and Twose Farms, Whitland. 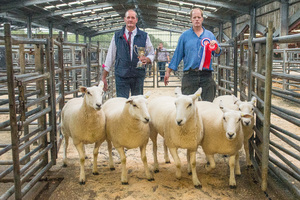 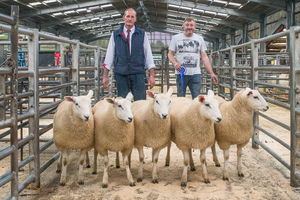 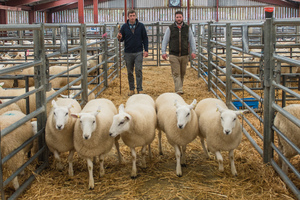 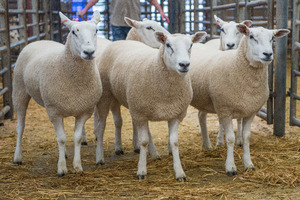 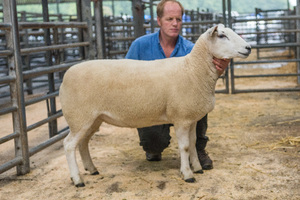 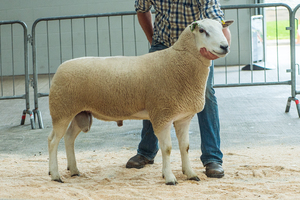 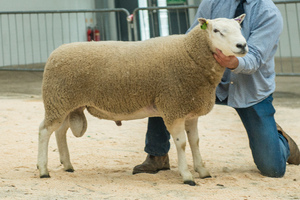 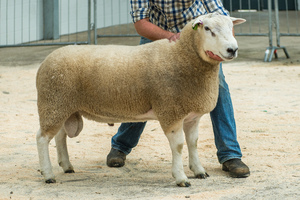 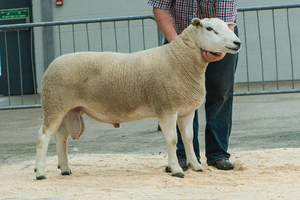 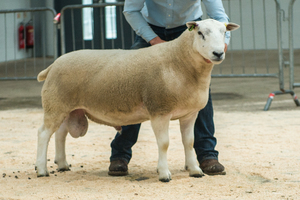 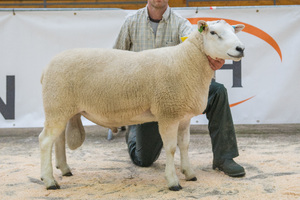