Todays sale was a sale for selling shearling ewes with buyers who had trailers to fill.  The quality of sheep was noted throughout.  The demand for the shearling ewes was so that the average was £57 up on the year leading to 100% clearance in the section.  Ewe lambs and rams saw a more select audience but again increased average up £25 and £133, respectively.

The small penful of two-year olds from T Price, Lampeter set the day when selling for £160/head to Messrs Mathias, Felindre.

Those ewe lambs that were picked out, sold well, the current buoyancy in the prime markets putting a base in the proceedings with vendors looking for prices above the store ring.  AW Davies, Pwllheli sold the top price at £122/head to K Hollis, Eye.  Mr Davies also sold another pen at £117/head to CT Cresswell, Brecon.  ST Morris, Hay on Wye sold to N Coles, Cynghordy at £110/head. 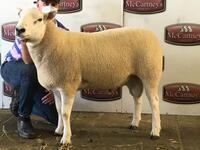 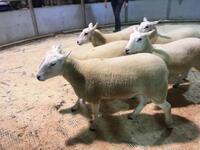