Quality was high and so was demand at the annual Lleyn sale with six pens of shearling ewes over £200, ewe lambs to £140 and three rams over £1000.   A positive start to the 2020 Sale Season mirroring the punchy breeding sheep trade across the country.

Two great runs of flock aged ewes started the sale off well with RHS Turner of Payhembury selling two year old ewes at £136/head, closely followed by S Redwood of Lifton with the same age at £135/head as well as three year olds at £128/head and four year olds at £115/head as Messrs Turner received £112/head for his four year olds and both vendors made £92/head of 5 year old ewes. The 42 older ewes averaged £117, up £24 on the year.

Some absolutely fantastic shearlings were well rewarded with a strong trade from a wide ranging array of new and regular, local and travelled buyers. Six pens selling in excess of £200 to a top of £215/head for regular consignors of quality E & D Jones of Machynlleth, Powys.  These were bought by AP James, Bridgenorth.  Their next pen at £210/head sold to JR Williams & Daughter, Nympton.  AW Hughes of Gwynedd brought quality that returned a pen of six at £208/head to AP James.  Followed by a pen at £195/head to T Hall, Marazion. Local consignor Sue Redwood sold a pen of five at £205/head to BJ Gruett, Wrangaton.  Twose Farms of Carmarthen sold their best at £202/head to AP James. Ashton Selway of Stalbridge, Dorset rang the bell at £200/head also to AP James. Plenty of better end shearlings from £170/head to £195/head, straight farming sorts from £145/head to £168/head and a few showing signs of the desert like conditions of the South East back from that to give an overall average of £167.23, up £25 on 2019.

Ewe lambs followed in the same vein with Cornish breeders JM & GC Adams of Truro taking the top spot at £140/head to A Parker, Cullompton.  Twose Farms sold eight at £128/head to R Irwin, Umberleigh.  WJ & DJ Williams of Pwllheli, Gwynedd sold his five at £126/head to R Irwin.  AW Davies also of Pwllheli sold his best at £124/head to the same buyer.  Very little under £100 and an overall average of £107.78 is some £28 better on the year.

Four rams at 800gns, two from vendors already mentioned but also for Westcountry vendors relatively new to selling Lleyn rams at this fixture being Harpers Holdings of Holsworthy and DJ Searle of Helston with a late ballot. Majority of rams selling between 500 and 750gns including the best of the aged rams which hit 700gns twice, firstly for RHS Turner with a five year old ram and also for AW Davies with a two year old. 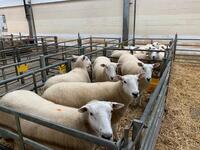 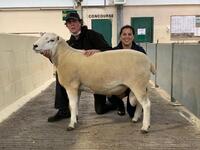 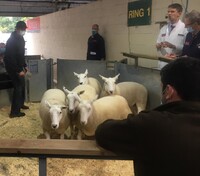 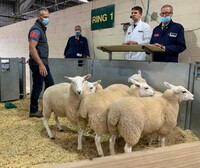 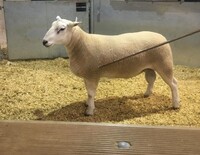