Today's sale was a strong day for the females with 100% clearance in the senior ewes and shearling ewes with only one pen of five ewe lambs not finding a home.  The rams saw a harder to please demand but still managed a clearance of 78%.  All averages were up on the year with females £20 - £42.50 up.  Rams saw a lift of £87.

The shearling ewes were topped by well known breeders E & D Jones, Machynellth when selling a pen of seven for £220/head to Andrew Hartley, Hebden Bridge.  The same buyer bought a pen at £198/head from the Jones’s.  Whilst GW & GW Green, Bridgenorth also paid £198 for a pen of eight form the Jones Family.  All the way down from Ruthwell, Scotland was James Goldie who sold pens for £196/head and two lots at £190 to JM Hallam, High Peak.  JA & R Geldard & Sons, Kendal sold their best pen at £195/head to Adam Kikbride, Keswick.  There was a consistent show of quality sheep throughout with £160-£170 achieved regular away.  You could pick up smaller compact types from £145 to £155.  With those picked out for pedigree breeding regularly £180 and above.

The solid trades in the prime and store lamb rings at present provided a firm base for ewe lambs helping to put the average up £21 on the year.  A & G Hughes, Clynnogfawr topped when selling their first pen at £202/head to the telephone bid of Francis Brewer, Exeter.  Next AW Davies, Pwllheli sold his pen at £172/head to another telephone bidder this time, Aidan McConville from Northern Ireland.  Mr McConville also bought two pens at £140/head from G & A Fort, Keighley.  Both WJ & DJ Williams, Pwllheli and C & J Price, Brecon sold pens for £120/head. Most pens hit the £100 with some smaller running type lambs bought could be bought in the £90’s. 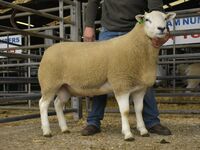 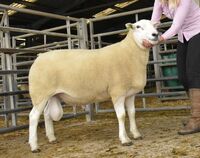 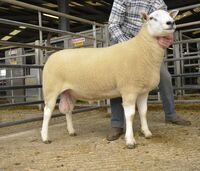