'What a lovely day! Remembering it will brighten up some gloomy winter evenings.'....60 farmers had a truly memorable time at the West Country Lleyn Sheep Breeders Club event hosted by Cathy and David Evans at Oldaport Farm near Modbury, South Devon on Sunday 5th August.

David explained that, back in 1981, Shirley & Ralph Evans bought five Lleyn ewes and were so impressed at the first lambing that they decided to have a flock of pure Lleyn and bought ewes from the best flocks at that time. In addition to the registered Lleyn, the Evans' kept a flock of non-Lleyn commercial ewes. However, lambing was chaotic - 'We found them to be poor mothers, so we sold them and replaced them with a flock of Lleyn put to terminal sires (Texel, Suffolk & Hampshire tups). Eventually, we had over 1000 sheep.'

1989 saw the family move to Oldaport. It is very steep in places with thin soil and has around 34 inches of rain (normally!). Cathy, the Evans' daughter, took a sabbatical 'year' from her horticultural studies and has stayed with the Lleyn ever since, farming with her parents and then running the flock with her brother David since 2008.

'The flock is basically closed. However, we do buy rams to ensure new bloodlines and avoid in-breeding.' Visitors saw the latest stock sire, Tacho Force, purchased from Flock 350 at Exeter Sale in 2017. The flock has been Signet recorded since its formation. However, 'these days, to monitor and improve flock performance, we use LLEYN GOLD, a Lleyn Sheep Society recording scheme'.¬Ý¬Ý'Lambing (around 200%) usually takes place at the end of February and early March to take advantage of the (slightly unreliable) spring grass. Ewe lambs are kept and, when shearlings, some are retained as flock replacements but the rest are sold through the Society Sales (mainly at Exeter) along with a small number of carefully selected registered rams. Most (castrated) ram lambs are sold at 40 kg minimum weight. In 2017, 14% were U, 86% R - 82% were 3L; 18% 3H. In addition, some meat lambs are sold to local pub/restaurants, where their quality and flavour are appreciated.' 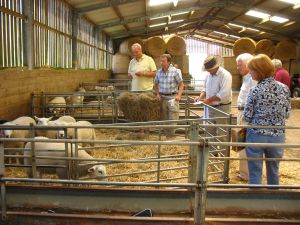 The farm walk was notable for the fantastic views from the 'hogs back' and the quality of the Lleyn ewes - their style and their conformation/condition, especially considering the almost total lack of grass. One local farmer told me 'he had bought 20 of the Evans' ewes last year and had had 42 lambs 'ready now', even in this difficult year.'¬Ý¬ÝBack for a superb tea and stock judging. Two new Lleyn breeders (Michelle Moore and Carla Finch) and Chris Crudge demonstrated their expertise here!¬Ý ¬ÝAll in all, the Open Day was extremely friendly, enjoyable and informative, bringing together lots of old friends and many new faces, several of whom were seen buying at Exeter Sale.¬Ý

Warning: Invalid argument supplied for foreach() in /var/www/vhosts/beck.yorserve.co.uk/lleynsheep.com/packages/tweetcrete/models/tweetcrete_user_timeline.php on line 47