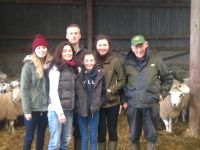 For those of you who regularly attend Society sales in the autumn you will be familiar with the name WJ & DJ Williams and the Tacho flock.  In 2015 Wil Williams attended eight of the Society sales with the top priced ewe lambs five times, top priced ram twice, this included the 6500gns sale of Tacho Destroyer at Carlisle. He also conquered the older ewe section and shearling ewe section at a couple of sales.  This flock has become renowned for producing quality ewe lambs and this was echoed by winning the related class at Skipton, Welshpool, Carmarthen, Ruthin and Exeter.  He walked away with the champion ram at Ruthin, Skipton and Exeter.  These are achievements which have not gone unnoticed by the Society.

Bodtacho Ddu is located on the north side of the Lleyn Peninsula just above sea level.  There are 180 acres of grassland on a mostly fertile sandy soil with a further 20 acres of summer grazing rented.   Wil says “we enjoy a mild climate, but suffer strong persistent wind from the Irish sea”.

Wil farms with his wife Debbie who works as a primary school teacher.  They have three daughters, Gwen (19), Luned (17) and Nel (12).  Wil is the second generation on the farm having inherited from his parents Medwyn and Beryl who purchased it in the early sixties.  Medwyn who is 82 years old still works alongside Wil on a daily basis.

Flock 350 began from very humble beginnings.  Wil remembers, “It all began with my uncle coming to get

colostrum from our dairy farm when I was 13 years old”.  Wil’s uncle was Thomas Rees Roberts, flock 43, one of the founder members of the Society.  Thomas paid Wil and his bother with two Lleyn pet lambs, and that was the start of this outstanding flock.  Wil gradually increased the flock over the years from these two lambs.  Thomas helped further by loaning rams.  Apart from 25 shearling ewes which were purchased in 2006 when the milking herd was dispersed, the female side of the flock has been kept closed.  Wil is proud to stay true to the characteristics of the Lleyn breed.  Wil believes that his uncle Thomas’s influence as an extremely successful breeder who was always very passionate about the breed and the Society has helped him to build this strong flock.  “

The flock currently consists of 280 registered ewes, 80 Suffolk x Lleyn ewes, 200 Lleyn ewe lambs of which 80 have run with the ram.  There are 5 Lleyn rams, 2 Texel and 1 Suffolk ram.  25 ram lambs are kept back for possible registration as shearlings.  When selecting rams to take forward Wil says he “looks for something that is pleasing to the eye whilst also using my experience and knowledge of the flock”.  To catch the early primestock trade Wil puts the Texel over his Suffolk x Lleyn ewes to lamb in February.  He puts 25 Lleyn to the Suffolk each year to breed replacements for this part of the flock.  The pure bred ewes are put to the Lleyn with all females retained (usually about 250), 160-170 are kept as replacements.  The remainder are then sold at Society sales.  The male lambs not selected for breeding are sold fat off grass from May onwards.  The majority are sent deadweight with some sold through the live markets.

The farm runs 50 commercial suckler cows.  Mainly Limousin crosses which are put to a Charolais bull.  Store cattle are sold at 10 to 15 months of age through Bryncir Market.

Lambing runs from February with the ewe lambs completing in April.  All the ewes are scanned with percentages of 190-200% reached year on year.  “We are quite intensively stocked hence the Lleyn breed suites out system” Wil comments.  The twins and triplets are brought inside approximately six weeks before lambing for convenience.  The singles and ewe lambs are lambed outdoor.  “Those housed will be fed a diet of hay and concentrates of which amounts will vary depending on lambs carried and condition. 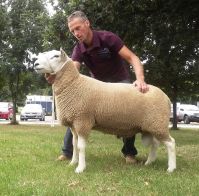 Another success in 2015 was winning the best large flock in the North Wales Club Flock Competition.  Wil and Debbie have not found the time to show during the summer as time is short especially as Wil does some contracting work.  The success at the autumn show and sales more than makes up for this at the moment although it maybe something they do in the future.

Wil remains positive about the future.  “Despite the hardship in the industry at the moment, I remain optimistic the future looks bright for the Lleyn breed”.