The rise of the Lleyn

Surveys have been commissioned by relevant bodies including the MLC, MAFF and now DEFRA and EBLEX.  The surveys have been sent out as postal questionnaires directly to sheep keepers in 1971, 1987, 1996, 2003.  The results of the most recent survey in 2012 have now been released having undergone analysis. 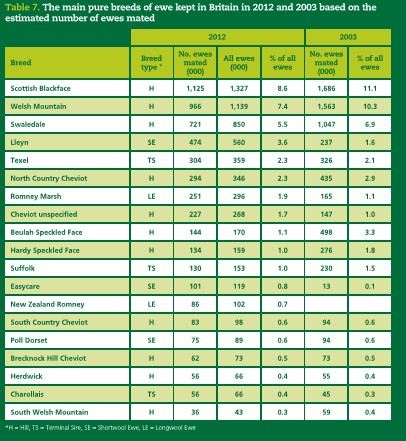 The below table shows major ewe breeds mated to Lleyn rams in 2012.

The major ewe types were Lleyn crosses and Texel x Lleyn ewes.  About 372,000 ewes containing some Lleyn ancestry were mated to Lleyn rams.  About 78,000 crossbred ewes containing Lleyn genes were mated in 2012; 27,000 to Texel rams and a further 20,000 to Lleyn rams.  Therefore in 40 years the Lleyn breed has risen from a very small local Welsh breed to the largest non-hill purebred in Britain and the fourth largest non-hill ram breed.  In addition, it is third behind Texel and then Suffolk crosses for contributing to crossbred ewes, outside the mule/halfbred types.

Results of the 2012 survey of sheep breeds in Great Britain