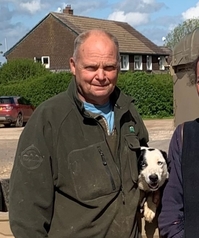 With the topical talk of climate change, Trevor believes he has the business in a strong position.  “For the past ten years we have worked hard to build a low input, high output system.  We moved into the mid-tier Stewardship Scheme to mitigate the downturn in BPS payments.  Part of this sees the introduction of herbal leys to help cut down on the reliance of imported Nitrogen.  Also providing a diet that finishes lambs quicker than the standard grass-based system. I believe we can stand on our own two feet when the subsidy payments have gone.  We are running a low stocking rate alongside better grazing methods of old pastures generating a lower carbon footprint.  We have reduced medicine use hence antibiotics and wormers.  Sheep concentrates have been removed.  We don’t use Nitrogen fertiliser, we use a swardlifter and aerator.  A little chemical spray is used to control weeds such as thistles and nettles”.  Also putting the flock in a strong position is the closed flock element and push for efficient ewes.  Read more [HERE] 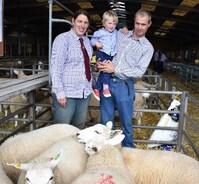 The future of the farming industry is very much on the Hale’s minds, with uncertainty around the ELMS payment scheme possibly seeing some farmers moving to part time. “If this is the case, the Lleyn is well placed as the breeding ewe of choice as she is easy lambed, milky and an attentive mother, all useful traits if you are not able to be on hand full time.” Farmers moving to larger more intense operation will also benefit from a ewe that knows her job. Phyl’s own personal experience from the early days of renting up to 14 miles away meant that overnight the sheep were left to get on with it “I don’t think any other breed would have looked after me so well”. Read more [HERE]

Matt notes that there have been Lleyn at JCB for many years, the decision was taken in 2014 to produce registered stock “with a view to improving genetics within the whole sheep enterprise whilst having 100% ownership of our genetics”.  Read more [HERE]