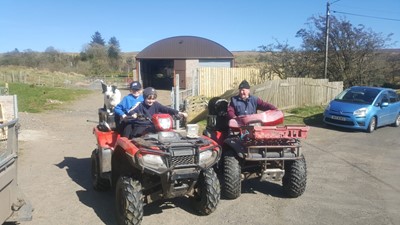 When it comes to adverse weather in Northern Ireland the ‘Glenshane Pass’ has a notorious record as one of the worst hit areas.  An area deep into the Sperrin mountains, today this is home to a flock of over 200 Lleyn ewes and three generations of the Bradley Family.

John Bradley together with his son Mickey and his three grandsons Jason, Shane and Patrick farm his land with a continued passion due to the success of this hardy, prolific sheep.   Alongside the Lleyn ewe you will find 120 Lanark Blackface or Lanark x Lleyn ewes.

Twenty years ago, the farm consisted of all horned sheep.  Lanark ewes where lambed down in late March and April with all male lambs being sold as stores in the local livestock market.  John always had a desire to keep his own ewe lambs as replacements and today this is well recognised within biosecurity guidelines.  It was back then, at a point in his farming business when he wanted more return from the farm.  John scrutinised his little ‘records’ book that nearly all us sheep farmers own.  He was quick to recognise figures showing his lamb sales and lamb numbers weaned were disappointing and he set out to search for a crossing sire to initially bolster lambing percentages.  It was this attraction that naturally made John purchase a Lleyn tup to service a small percentage of his Lanark ewes.  The first crop of ewe lambs were retained and lambed down as shearling ewes.  Immediately his lamb numbers increased, and these lambs commanded a higher price in the store ring that autumn.

Since then, the Lleyn tup has always been used and now the farm is home to slightly more than 200 purebred Lleyn ewes.  When asked about the advantages of the Lleyn sheep the Bradley family are quick to recognise two main attributes.  The Lleyn ewes produce more lambs, and the male lambs demand a typical £20 head more, over the horned lamb in the store ring.  For these reasons alone, the Lleyn breed now holds a stronghold within the future of the farm.

January 2021 scanning results forwarded one empty ewe in 213 Lleyn ewes scanned.  The use of the Dorset teaser tups shows a typical 70% of ewes mated in the first 10 days.  This can lead to a busy lambing period, but it also has an advantage with wet adoption and the fact that most farmers like Mickey Bradley in Northern Ireland today are taking time off their work at this time of year.  The advantage of the Lleyn ewe for the Bradleys does not stop there as they note the fact that the Lleyn ewe will very often accept a foster lamb from any other breed.

Spring 2021 brought changes to many households and businesses with the Covid pandemic.  Mickey temporarily closed his mechanising business, under government guidance.  With his three sons at home more help than usual was available for the upcoming lambing season.  It resulted in a higher than usual lamb crop and the three boys where experiencing first-hand life within the lambing shed.  When asked how they compared the Lleyn ewe to the Lanark ewe at lambing, Shane at nine years of age was quick to say they weren’t ‘as mad’ and the lambs born where ‘up quick to suckle’.  Not something that probably helped the lad with his home schooling but a point to note for those who are looking for a reduced workload at lambing time.  The Lleyn ewe with her great mothering ability, docile nature and lambs that just want to get up and go puts this breed of sheep in an advantage to most at this time of year. 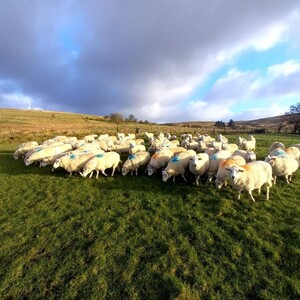 Preparation for any lambing season begins mid-October with the introduction of the teaser tups, followed by the selected tups per batch of ewes some 14 days later.  Tups are matched to the age of the ewes, and all are colour coordinated to assist in the record keeping at lambing time.  Each tup will typically stay with this batch of sheep throughout his time on the farm.  Ewes are pregnancy scanned at approximately 90 days and separated accordingly.  Singles are sent back to the mountain and twins are then kept on the lower parts of the farm albeit this is still 700 – 850 ft above sea level.  Triplet ewes are never in high numbers but these will get the best grass available with an introduction to concentrates when required.  All sheep go to the lambing sheds at point of lambing.

Singles born are generally moved from their individual pens within hours and over the next 2 weeks they make their way through the picturesque Sperrin Mountains to an altitude of 1100 ft.  Grazing alongside the single rearing horned ewe, both will stay here till the following tupping season.   All ewes rearing twins will get the best grass available to them and as John recalls we hope that this spring brings better grass growth than the spring of 2021.  Concentrates are typically fed to the sheep pre-lambing at a rate of 125g/day for single bearing ewes and 250 g/day for twin bearing ewes for 4- 6 weeks.  Due to lack of grass in spring 2021 concentrates was fed to the twin rearing ewes up to the first week in May at a typical rate of 300g/day.

Lambs are weaned at 120 days and the male lambs sent to the local livestock market as stores.  Ewe lambs will go to the better grass on the farm and stay here until early the following year.  Early February sees the best of them selected and sent back to the hill as replacements.  The remainder are sold as fat lambs at a time when market prices are strong.

John together with his grandson Jason have a liking for the Lanark sheep and their ability to perform on the more marginal farmland.  Running the Lleyn ewe alongside them and with a mind-set that all ewes are treated the same, he can see first-hand any advantages.  The Lleyn ewe will generally have a better cull value and typically have a higher body score at any time of the year.  With more lambs per ewe and a lamb that dictates a £20/head more the farm is showing a better return.  John comments on the Lleyn lamb having a better growth rate and has the ability to reach higher weights at time of sale.  When asked about how he believes the Lleyn ewes produce a higher weaning weight of lamb per ewe place he puts it down to the natural ability of the ewe to produce milk but more so ram selection.  John does not purchase any female sheep and says ram selection is everything to the success of his farm.

John looks for a strong Lleyn tup that will continue to introduce power into his sheep.  He is looking to breed ewes that can lamb down two strong lambs that have what he refers to as a ‘bit of bone’.  Ewes do not spend long inside due to demand for space in the lambing shed and the lambs need to be fit to go out soon after birth.  Furthermore, a stronger cull ewe demands a higher price.  He selects a tup which displays good muscling and growth rate.  ‘The bigger my store lambs and better muscled they are at 120 days the better.’  John’s early bloodlines within his Lleyn tups would belong to the Kennedy and Edwards families, but more recently he has purchased from breeders Barry Latimer and Declan Mullan.

What does the future hold for the Bradley family and Lleyn sheep…?

John and Mickey are more than happy with the performance of the Lleyn ewe on their farm. This medium sized ewe has proven to possess longevity, hardiness with the ability to rear two strong lambs at 1000ft.  We have increased our store lamb sale price and we can offer more for sale.

My final question to the Bradley family - would you ever consider crossing the Lleyn ewe back to the horned ram for the cross breed ewe?  ‘That would defeat everything we have achieved and to buy a good tup would cost us considerably more money than a Lleyn’

The Lleyn sheep is a twenty-year-old success story for the Bradley family so surely the Lleyn tup could offer the same success to other similar enterprises.