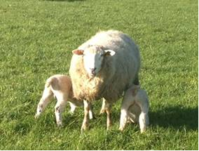 Ewe productivity is one of the most important factors influencing flock profitability.  This is greatly affected by the number of lambs produced by a ewe and her ability to rear those lambs.  To enhance flock performance, replacement females must possess superior genetic potential to the ones they are replacing.  This can only be achieved by selecting females of known breeding potential.  To enable animals to achieve maximum genetic potential they must have high health status, and offered appropriate nutrition.

The breeding policy implemented across the flocks at both the Hill Farm Centre and the Beef and Sheep Development Centre focuses on selecting breeding stock of high genetic merit, proven performance, ability to perform at grass and suitability for their surrounding environment.  All animals are individually EID tagged at birth and performance is monitored throughout their lifetime and this information forms the basis upon which breeding decisions and management decisions are made.

The flock at the Beef and Sheep Development Centre consists of 220 predominantly Lleyn cross ewes, mated to a Meatlinc terminal sire.  The replacement females are sourced from the upland flock at CAFRE’s Hill Development Centre.  The ewes in this flock are Scottish Blackface x Swaledale x Texel which are then crossed with a Lleyn ram.  All of the rams are selected for high maternal ability and performance.  60 Lleyn cross ewe lambs were selected in August immediately post weaning using litter size and growth rates as the main selection criteria.  The current replacements had an average growth rate of 230 grams per day from birth to weaning, 58 were twin lambs and two were triplets.  This selection was made possible using automated data capture through EID and a farm management software programme.  The data was captured at various times of the year alongside routine husbandry procedures.

The main target for the flock at the Beef and Sheep Development Centre is to wean 1kg of lamb per 1kg of ewe put to the ram.  All progeny are finished, ideally off grass at a target age of 180 days and meeting market specification.  To achieve these targets the breeding policy focuses on optimal ewe prolificacy, improved milking ability and superior lamb growth, alongside a paddock grazing system. 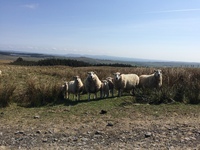 Ewes go to the ram for two cycles commencing mid October to begin lambing early March.  In 2016 the ewes were scanned early January at 206%.  Lambing began on the 5th of March, and majority of the lambs were born by 25th of March.  Final lambing percentage was 182% and lambs had an average birth weight of 4.3kg.  Performance was continuously monitored and at 8 weeks average lamb weight was 21.2 kg, with an average daily live weightgain (DLWG) of 310 grams per day.  High growth rates at this stage are a good indication to ewe milk ability.

Lambs continued to grow well at grass and were weaned mid July, weaning weight is corrected to 112 days to enable flock comparison year on year.  The average 112 day wean weight and DLWG was 31.8kg and 250grams per day respectively.  The overall wean rate for the flock was 1.72 lambs per ewe mated.  Weaning rate, 112 day wean weigh, and ewe weight at tupping are also used to calculate ewe efficiency, which was an average of 0.8kg of lamb weaned per kg of ewe mated.  This figure was below target due to a combination of weaning rate and weight.  Achieving 1kg of lamb weaned per 1kg of ewe mated may be an ambitious target for the flock; however we recognise the need for improved efficiency to ensure financial viability.  In a bid to improve performance ewes with poor efficiency will be replaced.  The flock will be grazed on a different area to minimise parasites.