Lleyn Punching Above Their Weight 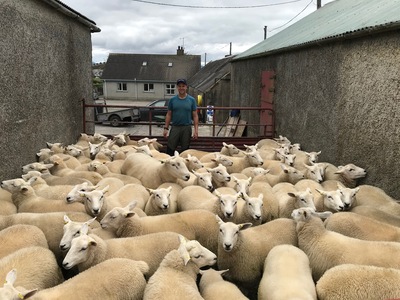 Neville Ross is a third generation farmer in Rathfriland in County Down whose family have tended to their lands since the mid-1920s. The farm previously grew crops such as barley and seed potatoes, destined for export. They also supplied potatoes to the famous Tayto crisp factory in Tandragee.

As a young man Neville developed an interest in sheep, initially investing in a variety of breeds with the help of his father. While his educational pursuits took priority for a number of years, over time Neville was able to get back to his love of farming on a part time basis. While working full time as an accountant, Neville shares the running of the farm with his brother.

As a man well aware of the need to have the figures add up to a profit, Neville was keen to farm in a way that gets the best financial return from the land. As a result of his research on the Lleyn Sheep Society website and other sources, the Lleyn breed sparked his interest. Neville contacted Seamus Killen (Flock no.1621) to source the beginnings of his first female foundation flock. Building on this initial success, Neville sought out local breeder Aidan McConville (Glennview Flock No 2002) for a ram to develop his flock to provide future replacements and quality livestock to sell.

Having started on his Lleyn adventure, Neville was pleased to see that with the onset of the lambing season, the benefits espoused by Lleyn proponents began to shine through, saying “there are huge advantages and financial gains compared to the breeds we had in my father’s days on the farm. The ease of lambing is a big thing and they produce plenty of milk”.

With the success of the first years lambing under his belt, Neville paid another visit to Seamus Killen in the summer of 2019 to obtain more Lleyn Shearling ewes. With his flock up to approximately forty ewes on ten acres, the lambing season of 2020 proved more successful than the previous year. As Neville acknowledged, “this lambing percentage is the best I have ever had, just look at my weaning record. There were 74 lambs weaned from 38 ewes which only had access to ten acres”. Neville rears his ewes and lambs on a rotational grazing system on ten acres. The lambs are all grass fed with some meal introduced when grass growth and covers are low. The majority of this year’s crop of lambs will be sold privately and at local sales with weights ranging in size of 38 – 42kg live weight with some possibility being retained for replacements.

Ever the busy man, Neville also runs a small free range hen enterprise in which the hens run alongside on the same land as the Lleyn sheep. Neville provides free range eggs and fresh bagged potatoes to the local community through a honesty box at the farm and a home delivery service. Because of the constraints on his time, Neville is happy with the low maintenance involved with the Lleyn breed, an important factor when you have off farm employment.

While Neville won’t be hanging up his calculator just yet, he is happy that in his early forays into Lleyn breeding, the numbers are adding up to a successful profit margin, saying “the Lleyns are definitely punching above their weight by making more profit in terms of lamb production and grazing per acre.”