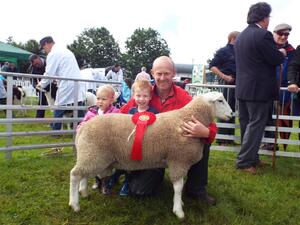 With the dairy herd being dispersed some years ago he was keen to get involved again with pedigree livestock.  He decided to establish a sheep flock-but which breed would best satisfy his aims of easy care and a high stocking rate?  He was working on a farm where a small flock of Lleyn were being run with a terminal sire. It was on this farm that it was suggested that he should consider the Lleyn as a breed which would satisfy his aims.

With typical precision Russell began a research program, reading all the available literature and asking searching questions from those who could provide answers.  Having decided that the Lleyn seemed the breed best suited to his lifestyle in 2011 he attended the breed sale in Ballymena.  "I was going into a completely new situation, but I thought if I buy from flocks with a good track record I should be on safer ground."  He bought 32 ewes, mostly from the Novara flock of John and Nora Johnston together with 5 ewe lambs.  A ram from B&E Latimer completed the days business and the Knockmult Lleyn flock was established.

Russell is a perfectionist and from day one he was determined to make his mark in the pedigree sheep world. The following year he bought all the available Norvara glimmers and paid 2050 gns for B&E Latimer's prize winning ram.  It was a record price for the Ballymena sale, but it was money well spent as this ram has bred exceptional well.

In the summer of 2014 Russell went to Scotland and brought home 80 gimmers from the well known Ballylinney flock of Derek and Cindy Steen, together with two stock rams, one with Commando bloodlines and the other a son of a ram from the Sackville Hamilton flock. His other 2014 purchase was a well bred shearling ram from C & A Kennedy.

The Knockmult flock has now reached target numbers and in 2016, 240 ewes and 100 ewe lambs will be in the lambing sheds.  Scanning has just been completed, a very satisfying 200%

The focus is on breeding top quality ewe lambs and the flock is establishing a reputation for breed character with good conformation and excellent skins. Apart from the female side there is a growing demand for Knockmult rams for pedigree and commercial use.  Attention to detail is the recipe for management. A mineral dose is given a month before the rams go in, with a further dose 4 weeks before lambing. Treatment for fluke and worms is on a planned program and the flock is on the Heptovac P as a matter of routine. To give the home pastures a winter break all the sheep go to local farms for some weeks before housing. They come home in early January and lambing gets under way before the end of February.

The use of teaser rams tightens the lambing pattern and most of the work is condensed into a 3 week period. "I take some time off from the other business to get the rush of lambing over and I also get invaluable help from my Dad, William, who keeps a close eye on the flock throughout the year.

The future plan is to maintain a closed flock, with only carefully selected stock rams been introduced.

The management system is fairly intensive.  The ewes are fed a limited amount of concentrates prior to 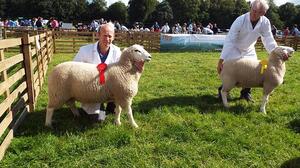 lambing, the level of feed being determined by scanning results, condition scoring and silage analysis.  At grazing the ewes and lambs are run on a rotation system with fresh grass every 5-7 days.

Russell regards the show ring as a valuable shop window and he has already collected a good number of rosettes for both junior and senior stock. In the biannual Northern Ireland Lleyn society flock competition Knockmult Lleyns were delighted to receive first prize in the large flock competition in 2015.

This year Russell is planning to host the Northern Ireland Club open day, an event which will be subject to the detail which is the hallmark of the Knockmult enterprise.

Russell, his wife Claire, who has a part time job in IT and their two children, Finn, who is three and 2-year old Maisie have a lifestyle which leaves little time away from the farm.  For Russell, however the sheep are his hobby as well as a business.

The progress has been remarkable since the day in 2011 when the foundation of Knockmult Lleyns was laid at the fall of the hammer.