Ruthless Streak Pays Off In Pursuit of Farm Profit 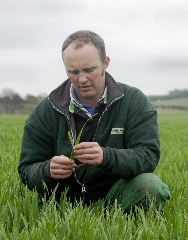 Farming is a game of tactics, according to Jonathon Watson, and those tactics have to change as rapidly as the market does. Robert Forster reports.  An uncle and nephew partnership, working from a base of 330 owned acres at Bowsden Moor, Berwick, Northumberland, is not afraid to radically adjust its portfolio of core enterprises if economic circumstances dictate.

Their interest in beef cattle is also maintained by 60 Limousin cross and British Blue cross heifers that are put to the bull each year. The progeny are sold whenever the market can give the best return.  But as recently as 2005 their main businesses were a 270-head commercial suckler herd and a unit for 700 black and white cereal-fed beef bulls - and, if all goes well on the planning side, they hope to install a 16,000 head, free-range laying hen flock by the end of the year.

In the meantime, the total acreage of land they farm, which is currently backed by an additional 500 acres of rented ground, is equally elastic as it expands or, as is the case most recently, contracts as a result of the diktats governing their current focus.  Every section of this business must deliver a profit. That means taking a flexible approach,’ said Jonathon. ‘There is no pointing in sticking with something that only delivers losses, just because you have always done it, or there is a faint hope in the distant future that things might get better.’

Jonathan and his uncle moved to Bowsden Moor, which sits at 300 feet and lies directly in the path of the 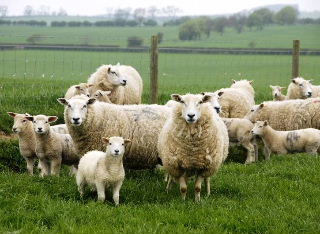 cold east winds that regularly blow in from the North Sea six miles away, 21 years ago after leaving the Whitehaven area of Cumbria where the family started up with a dairy herd on a 200-acre county council farm.  The radical shift in the subsidy support system when decoupling and the Single Payment Scheme were introduced in 2005 produced deep furrows in their brows as they contemplated the result of progressively shrinking income totals from beef cattle.  At the time, we were running the two beef enterprises, had less sheep, and sowed less cereals. Now we concentrate on the pedigree stock and, after giving up 300 acres of rented grass, we have expanded the arable from 50 acres and now crop 110 acres of winter wheat, 20 acres of winter barley and 70 acres of spring barley,’ Jonathon said.

The black and white bulls were the first to go. They used to come onto Bowsden Moor as eight-week-old calves from rearers back in Cumbria. They were claiming around £230 a head in Beef Special Premium, Slaughter Premium and an extensification payment, got through 2.5 tonnes of grain apiece, but earned a pittance from the market.  After decoupling it just wasn't going to work. We talked to McDonalds and other buyers to see what they were thinking but nothing we heard gave us any confidence to carry on,’ said Jonathon.  ‘We had sold all our commercial ewes and committed ourselves heavily to dairy bulls in 2000 after the 90-head limit on BSP was removed - but the arithmetic was wrong and they had to go.’ ‘We built up suckler cow numbers from 100 head to 270 head in 2000 too but they were sold on earlier this year for exactly the same reason.’  Before decoupling the subsidy income was good. They all qualified for Suckler Cow Premium and because we finished all the calves, we took BSP and £54 a head extensification from the bulls and SP from them and the heifers too. ‘But even though grain was cheap at the time, just £70 a tonne, the calves, which were creep fed, got through three tonnes apiece because we wanted to finish them to weigh 400 kilos deadweight at 13-14 months.’

I knew it was costing me £450 to produce a weaned calf off a cow and after the jump in cereal prices last year, it was clear we were going to get nothing out of these cattle while at the same time our annual SFP, which had been fairly impressive when it started because we were so well stocked during the qualifying years, was shrinking rapidly. ‘We did not want to waste this diminishing pot of money propping up a losing enterprise so the cows went too. We have no regrets.’  We needed at least 300p a carcase kilo for each of the calves to cover our costs and the market is still not delivering anything like the sum that is necessary. ‘On top of that, the labour, and capital, commitment on cattle is heavy. We were spending all summer leading in silage and straw and all winter feeding, bedding or mucking out. It was a lot of slog for no concrete reward.’  However, Jonathon had no problems sticking with their 1,000 pedigree Lleyn after decoupling. 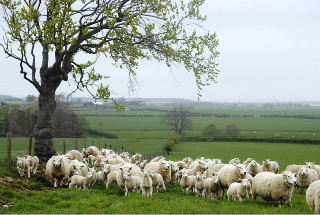 They tried out 400 breeders four years ago when they established a closed flock and discovered they could stock six to the acre compared with five from the Mule ewes they had bred from previously.  We have been getting 170-180 lambs sold for slaughter from each 100 ewes tupped and they are going off as mainly R grades at 18.5 to 19.5 kilos deadweight so the Lleyn is giving us around 1.75 more lambs to the acre,’ he said.

On top of this our surplus Lleyn gimmers are a good trade and, because the ewe premium was only £13 per head on a lowland farm like ours, we felt we could recover that loss from the market if we kept overheads down and managed the flock properly.  We want the farm to maintain its output at the same time as we reduce costs so sheep were the obvious choice - especially as current economics say the lost subsidy on beef cattle was too big to be recoverable.

The Lleyn are easy to manage and held their own over 2007, despite the market disruptions caused by foot-and-mouth. So far this year we have 190 per cent lambs on the ground compared with ewes tupped so we are feeling hopeful.’

The next big decision at Bowsden Moor is the free-range egg unit, which they hope will get the go-ahead later this year. The partners have noticed that the ex-farm egg price has moved up with the higher cost of cereals and, on top of that, battery egg production is to be phased out at the end of 2012.

Many battery egg producers will not be able to make the switch to free-range because their sheds are on concrete and they have no additional land. This should leave us facing a favourable market,’ Jonathon said.  We will see what the labour situation is when we are up and running. At the moment there is myself and my uncle and we have a full-time worker so we can spend time on the pedigrees. 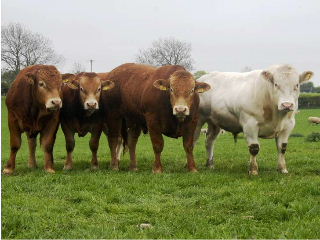 blowing the right way.  We are starting to look at British Blues, as well as our Tweeddale Limousins, so we can breed a female type that can produce the right type of weaned bull calf for the live trade with Italy and Spain.  Last year we sold 130, eleven-month-old, weaned bulls for export at £800 apiece and, if this market is to be developed in the future, it is obvious that continental buyers want to see more continental types of animal coming out of the UK.

And on the sheep side we are looking at which tups dobest when we use our own Brijon prefix Texels on the commercial Lleyn to breed a U grade carcase or use the Suffolk to put strength and bone into cross-bred lambs from the lighter types,’ he said.

‘It feels good to be part of a busy and hardworking business and I am sure it pays to be nimble when deciding management tactics.  It is true our tactics often change but so do the economic circumstances we operate in. It is very important that changes are made to accommodate shifts in the business climate; otherwise we would just be sitting in the same place, no matter which way the wind was blowing.’