"I would definitely recommend it" 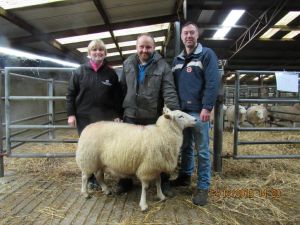 Sandymount Farm is situated in North Tipperary on 500 acres, a combination of both owned and rented land. The mixed farm enterprise is now run by Robert Clarke, having taken over from his parents Ann and George a number of years ago. While Ann and George still keep a close eye on the operations, the day-to-day running of the farm is solely Robert’s responsibility. As a result the farm has undergone a number of changes in the last eight years.

Originally having a mixture of commercial sheep breeds ranging from Charollais to Cheviot and everything in between, a chance meeting of the Llyen Sheep Society at the annual Ploughing Championships in September 2009 changed the farm’s fate. After much consideration 120 purebred hoggets were purchased from Northern Ireland in late October 2009. As the breeding season had progressed too far, sourcing a purebred Lleyn ram proved to be a difficult task so they decided to put the hoggets in lamb to purebred Charollais rams. The first crop of Lleyn-Charollais cross lambs in 2010 proved to be a great success and George was ‘very impressed’ with the offspring, bringing the best traits from both breeds. Although the cross was a big hit the second breeding season has seen the Clarke’s return to their original plan, to establish a purebred Lleyn flock. An additional 120 purebred ewes and several rams were sourced from Northern England in 2010.

February 2011 saw the farms first crop of purebred Lleyn lambs born on site. ‘Previously we had Tullow ewes, but the experience we had in our first year of purebred Lleyn ewes lambing down concreted the fact we had made the right decision’, Robert also commented  that the ease of lambing down, higher milking ability and better temperament of the Lleyn made the overall management much easier.

The Lleyn flock has been steadily increasing ever since 2009, to its current figure of 500 ewes and the Clarke’s have plans to increase numbers again over the forthcoming years. Along with the purebred Lleyn they also run a 50 head flock of purebred Charollais ewes. In 2014 they began putting a small number of Lleyn ewes to the Charollais rams. Robert states that ‘we make sure we keep good records at lambing time and watch the performance of ewes and ewe lambs. This helps us decide which ewe lambs we keep and put to the purebred Lleyn ram and which we cross with the Charollais ram’. All female replacements are bred from their own stock and they try to keep as closed a flock as possible only buying in rams when needed.

The offspring of the Lleyn-Charollais cross have been successful and fatten well off grass. Lambs are sold to the factory via the Offaly Lamb Producer Group, which Robert states ensures they received premium price but also has added conveniences. The Lleyn characteristics have definitely shone through, ‘I find that we can increase our stocking rate higher compared to the previous breeds we have had. This is a combination of both the higher lambing percentage and also the fact that the Lleyn ewe is a more compact breed’ adds Robert. Mixed grazing along with the suckler herd is also practised and aids along in the reduction of the incidence of worms. George noted that he finds the Lleyn a cleaner breed than others with less scouring and better on their feet.

Lambing starts the first week of February with the hoggets lambing first followed by the ewe lambs. While it is a tough few weeks the lambing is typically over within four to five weeks with only a small few stragglers usually left to lamb by week six. Excellent lambing facilities and concrete individual pens with foster gates where required, make the entire process a bit easier. Lambs and ewes are let out to grass as soon as possible after lambing, all weather permitting of course! A 12 week fattening period off grass is the norm, with those going to the factory receiving additional creep meal feeding.

2013 saw the inaugural Southern Ireland Lleyn Breeders Club open day at the farm, which has gone from strength to strength ever since rotating around the country. The future looks bright for Sandymount Flock, having received first place in the ewe class and overall champion at the Roscommon Show and Sale in December 2015. Robert finishes with a final note of advice, ‘for anyone thinking of getting into Lleyn I would definitely recommend it, from the ease of lambing, to the good feet I don’t think I can say anything only positives about the breed’.