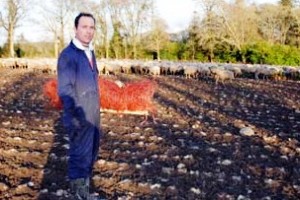 I first encountered Lleyn sheep when back in 1997. I used a couple of Lleyn rams on our 400 Suffolk cross ewes. We had been having trouble with our ewes getting 'too soft' and lambs being very slow to get up and go after lambing. I was very impressed with the Lleyn cross and kept most of the ewe lambs as replacements.

I saw what the pure Lleyn could really do when I worked on a farm in Cumbria on work experience during college. The main intention was to see a big flock of Charollais at Brian Atkinson's farm near Penrith, but it was the Lleyn that really stole the show for me. The ease of lambing and mothering ability were very impressive, so I had to have some. I imported 25 ewe lambs in 1998 and a further 25 the following year. I bought my first ram off Lionel Organ who turned out to be a super ram and laid the foundation for my flock and I still have daughters by him lambing this April at eight years old. 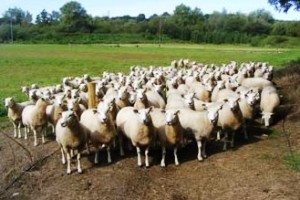 purchasing a further 70 hogget ewes from John Geldard and 35 ewe lambs from Farm Stock Genetics in 2006. I now place great emphasis on buying the right rams and have a completely closed flock. I try to buy high index rams or a ram with a known history and find these are more reliable breeders. The last ram came from the Incheoch flock of Debbie and Neil McGowan. I also sell about 75 shearling rams a year 25 of which are Lleyn. Many are repeat buyers breeding their own replacements and keeping a closed flock.

For me the Lleyn suits my system better than any other sheep I can think of. My farm is fragmented as most are in Ireland and I need a fit sound ewe that can lamb outside have good feet and look after herself and her lambs on very little. The Lleyns lamb outside from the first

of April and for the last two years have scanned just on the 200% which shows what the breed can do on a low input system. They winter on fodder beet and are given silage or hay from January onwards. The triplets go to grass six weeks before they lamb the twins four weeks and the singles two weeks. No meal will be fed to twins or singles and the triplets will get one pound up to lambing. I have also put 80 ewe lambs in lamb to Charollais rams this year and they scanned at 1.3.

The breed is increasing rapidly in Ireland with just under 500 sheep in our sale last year. The Club has two sales this year to accommodate the growing numbers and the growing demand. The first sheep being sold have gone mainly to new breeders but commercial farmers are getting their hands on them more and more and find them excellent. For myself I would like to keep increasing numbers but this is hugely dependent on the 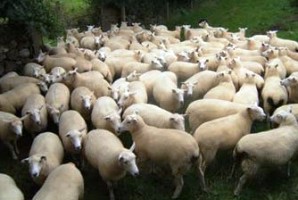 availability of land, which leading into the reforms of 2014 is a major problem. In my opinion the Lleyn will become a major force in the Irish sheep flock in the near future. The future is bright, the future is white!